Dr. Vsevolod Stebliuk, who  saved over 50 soldiers after a massacre by Russian-backed terrorists in eastern Ukraine, is the Ukrainian Coordinator of the Guardian Angels Ukraine project. 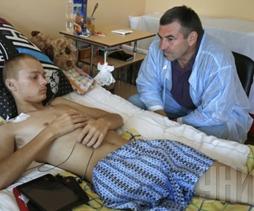 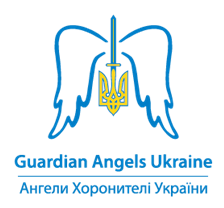 ​​​​​​​The Guardian Angels Ukraine Project was officially launched by the League of Ukrainian Canadian Women's League (LUCW) National Executive in Toronto on December 19, 2014 at a pre-Christmas benefit dinner. The event welcomed three special guestsfrom Ukraine: Dr. Ruslan Dobrovolsky (Head Doctor of the Maidan Hospital, Dr. Vsevolod Stebliuk (Hero-medic of Ukraine and Advisor to Ukraine's Minister of Defence for Medical Issues), and Tetiana Chornovol (well known anti-corruption activist and Ukrainian Member of Parliament).The dinner was co-hosted by the Toronto and Etobicoke Branches of the LUCW.

The evening welcomed special guest, Minister of Justice and Attorney General of Canada, the Honourable Peter MacKay, who delivered greetings on behalf of the Prime Minister of Canada, the Rt. Hon. Stephen Harper. Other government officials included Members of Parliament Ted Opitz and Bernard Trottier, as well as Member of Provincial Parliament, Yvan Baker, and Acting Consul General of Ukraine, Liudmyla Davydovych. The audience also enjoyed performances by the Canadian Bandurist Capella and the Prolisok Ukrainian Youth Association Ensemble.  As part of the fundraising, evening attendees were able to bid on a wide variety of items at the silent auction, as well as purchase the project’s unique “ved-medic” fatigue-dressed teddy bears. We extend special thanks to the benefit dinner's founding sponsors.

In her remarks, the National President of the League of Ukrainian Canadian Women, Lisa Shymko, outlined the mission of the project and provided highlights of the Ukrainian delegation’s visit to Canada, which included meetings with Canada’s leading experts in rehabilitation medicine, including the medical team at the renowned St. John’s Rehab facility in Toronto. The delegation also visited the offices of GestureTek, a world leader in video gesture control technology for interactive multi-touch surfaces. The Guardian Angels Ukraine project will work with GestureTek, whose technology is used in the health sector for virtual rehabilitation and sensory stimulation.

Prior to the banquet, the LUCW hosted a private meeting for the Ukrainian delegation with Minister Peter MacKay, parliamentarians, as well as Dr. Vivian McAlister, a member of Canada’s Armed Forces and one of the country’s leading combat surgeons. The meeting focused on Canada-Ukraine cooperation in the field of justice, defence and medicine.

During the benefit dinner, Dr. Stebliuk, Dr. Dobrovolsky and Tetiana Chornovol each spoke of their harrowing experiences during this dramatic, yet transformative year in Ukraine’s history.  Dr. Stebliuk recounted his time with the Myrotvorets (“Peacekeeper”) battalion, describing how despite betrayals by superiors they survived over a week of attacks by Russian and separatist forces, including the infamous Ilovaysk massacre.  It was during the Ilovaysk ambush that Dr. Stebliuk heroically fought to save the lives of soldiers in his and other battalions.

Dr. Dobrovolsky, the Guardian Angels Ukraine Project Coordinator in Ukraine, recalled how Ukrainians on the Maidan came together to create much needed ad hoc medical centres that treated those who were injured by Berkut forces and sniper fire during notoriously violent episodes of an otherwise peaceful protest.

One of the most anticipated speakers that evening was Tetiana Chornovol, who, almost a year ago to the day, had been severely beaten and left for dead by ex-President Yanukovych’s thugs.  Grasping a picture of her late husband, Mykola Berezovyi, Chornovol revisited her brutal beating, her time at the front with the Azov battalion – where she can often be found to this day - and the tragedy of losing her husband to Russian sniper fire.  Despite her sombre story, the young activist fondly recalled that she always knew her husband, who was from Donetsk, was a true patriot. “It’s easy to say you’re a nationalist in Lviv, but it’s a whole other matter to say and act on those convictions when you live in Donetsk,” she said.

The LUCW also had the opportunity to facilitate Tetiana Chornovol's interview with Adrian Humphreys of The National Post. The full-page article appeared in the December 20, 2015 national edition.

To conclude the evening, the three guests of honour were each presented with Guardian Angels Ukraine awards. Dr. Stebliuk’s award was bestowed in memory of the late Mykola Berezovyi.  It was also announced that the BCU Foundation will initiate a triennial award for journalists who achieve excellence in their work on topics pertaining to Ukraine.

The Guardian Angels Ukraine project will support a wide array of undertakings, including the establishment and development of rehabilitation centres in Ukraine to treat the thousands of members of the Ukrainian Armed Forces, including the National Guard and volunteer battalions, who have sustained serious injuries during the ongoing Anti-Terrorist Operation (ATO) in eastern Ukraine.

Dr. Ruslan Dobrovolsky, Head Doctors of the Hospital of the Maidan, is one of the lead medical participants of our project in Ukraine.